San Luis Valley ranchers see dividends in saving water for fish. Are they on to something?

San Luis Valley ranchers see dividends in saving water for fish. Are they on to something?

Some ranchers are paid to change when they draw water from San Luis Valley reservoirs. There are benefits for fish, but also for management of land and animals.

Nathan Coombs, a burly alfalfa farmer in the San Luis Valley, never imagined he would trust an environmentalist enough to have a beer with one, much less partner with one to improve habitat for fish in the region’s rivers and streams. 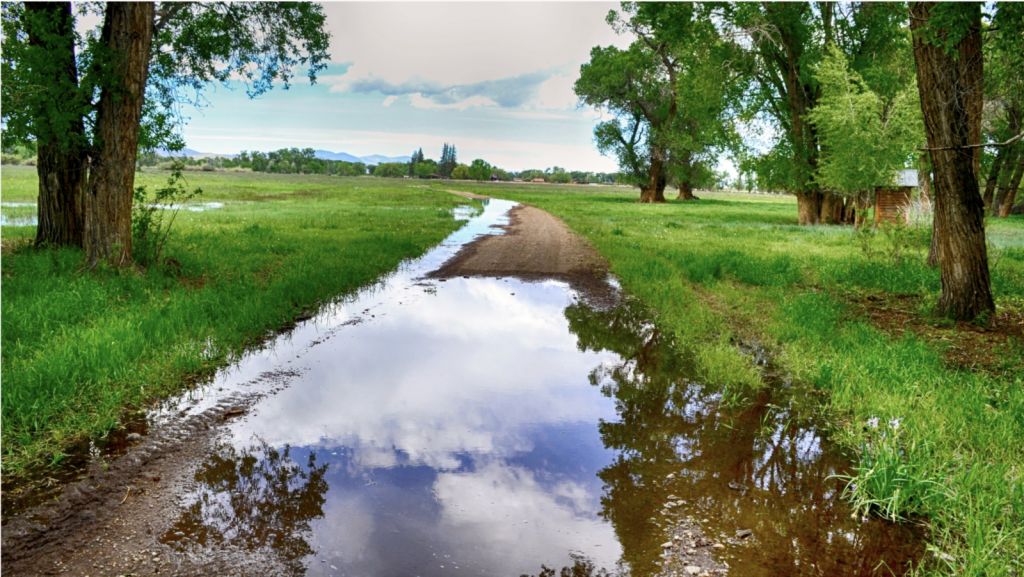 Pastures of Off Island Ranch near Del Norte are flooded nearly every year by the Rio Grande, which makes for lush grass to feed the cows grazing on the centennial ranch. (John McEvoy, Special to The Colorado Sun)

As manager of the Conejos Water Conservancy District, Coombs cares first and foremost about supporting the livelihood of agricultural water users in the upper Rio Grande Basin. As such, he had figured that more water for fish meant less water for farmers and ranchers.
And that was unthinkable.

But things took a surprising turn about seven years ago when Coombs met Kevin Terry, a fish biologist at Trout Unlimited. Terry, who manages the organization’s efforts in the Rio Grande Basin, approached Coombs with what seemed like an outlandish idea, if only because it had never been suggested before, at least not here: shift the timing of some water deliveries from storage reservoirs to provide enough water for trout to survive the winter, while still meeting the requirements of the Rio Grande Compact.
TODAY’S UNDERWRITER

Even a small boost in streamflows can be enough to significantly help trout and other fish hang on until the late-spring snowmelt naturally improves their ability to reproduce.
For decades reservoirs in the basin have only released water for agricultural, the basin’s primary water users, during the April-through-October irrigation season. As a result, many streams and ditches run dry or slow to a trickle in the winter.
What kept Coombs, whose district operates the Platoro Reservoir on the Conejos River, from rejecting Terry as just another antagonizing environmentalist or silver-spoon fly-fisherman, as he might have previously, was that Terry didn’t pontificate or try to persuade. Rather, he asked Coombs and other board members and residents what they needed to support their farms and ranches.

Terry then suggested a way to help them: Pay irrigators to re-time reservoir releases, providing them with cash, while giving native and wild fish a leg up.

Over the course of many beers in taverns with Terry and heated debates among district board members, Coombs became convinced that this did not need to be a zero-sum proposition. About two years later, in 2015, he joined Terry in creating the Rio Grande Winter Flow Program. That same year the district board voted unanimously to change a longstanding rule to allow for the re-timing of water released from reservoirs. 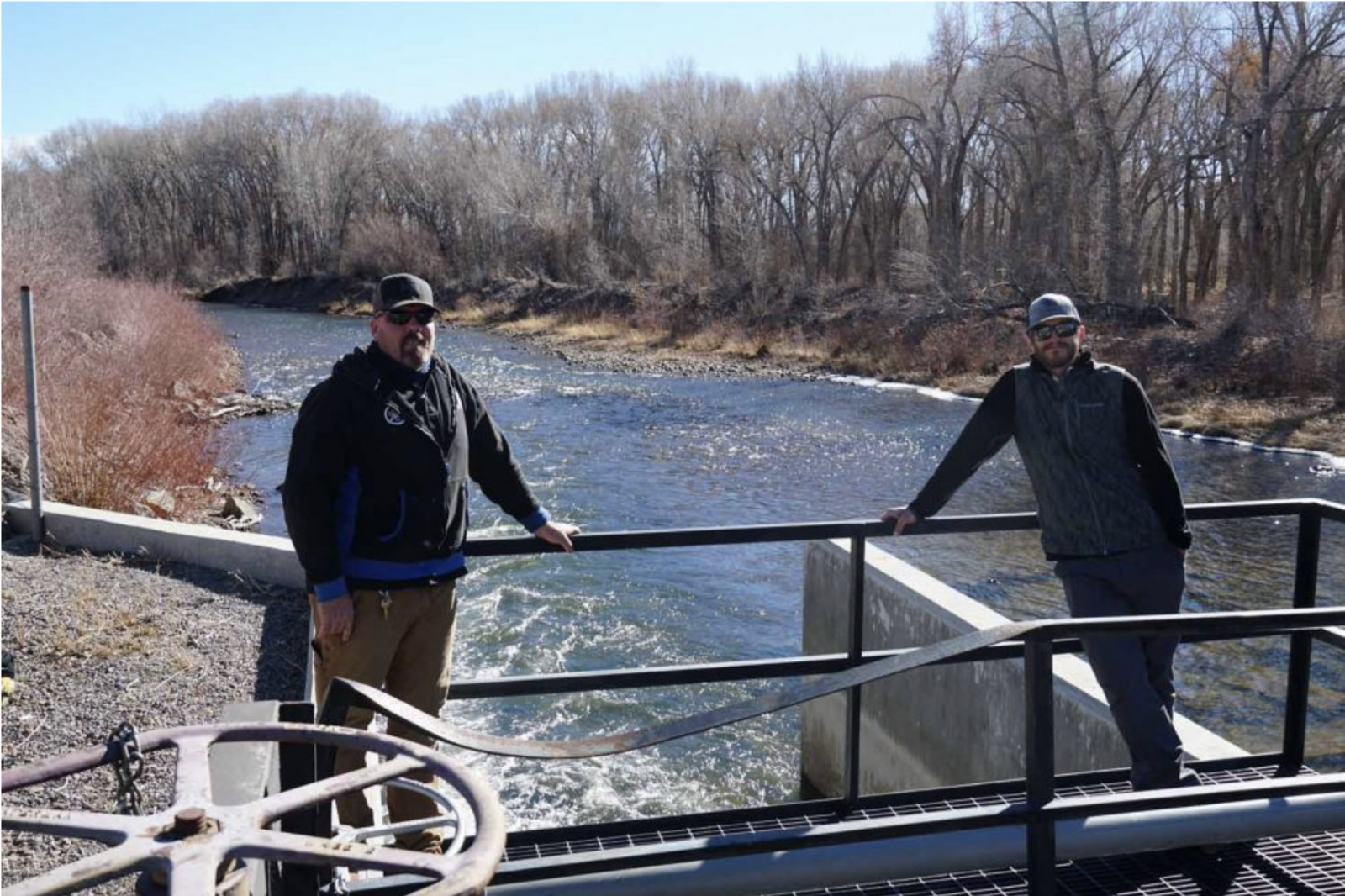 Conejos Water Conservancy District manager Nathan Coombs, left, and Kevin Terry, a fish biologist at Trout Unlimited, at the Manassa gate on the Conejos River. They are working together to make sure stream flows are adequate to support aquatic life while also protecting the livelihood of agricultural operations in the San Luis Valley. (Susan Moran, Fresh Water News)

The program works like this: Trout Unlimited pays participating water users to shift the release of a portion of their water allocation from the growing season to the winter months. Those landowners then pay a fraction of what they receive from TU to their local water conservancy district to release that amount of water from their storage reservoir, and they can keep the difference.

Dennis Moeller, for instance, owns a 2,000-acre ranch near the town of Antonito that stretches to the Conejos River in the southern San Luis Valley. Some 80 head of cattle roam the ranch in the winter, and another 400 graze on public land in the mountains.

Now, the Conejos district releases a portion of Moeller’s allocated water from Platoro Reservoir into his ditch through the winter. Not only does this help the trout upstream of Moeller’s ranch, but he no longer needs to truck in winter water for his cattle. Trout Unlimited pays him $10 per acre-foot. Moeller pays the Conejos district $4.50 per acre-foot and pockets the $5.50 difference. For a total of about 84 acre-feet, he netted $462.

Hardly a 401(k) plan, but it’s easy money. He said he still comes out net positive even if he needs to buy extra water to irrigate his meadow grass and alfalfa hay during the growing season.

And the collaboration is paying off across the valley.

“I promise you, I was considered the most anti-environmentalist in the room a few years ago,” said Coombs. “And the attitude of the board in the beginning was ‘no and hell no.’ But we realized that the [winter flow] program could benefit operators in the district, and that fish were a footnote. And we came to recognize that it also helps fisheries and tourism broadly in the region. The genius of this [program] is getting enough people in the room who understand what the common goal is, and enough trust.”

Five storage reservoirs in the basin participate in the program: Platoro, Continental, Terrace, Beaver Creek and Rio Grande. They operate on the Conejos, Rio Grande and Alamosa rivers.

For the voluntary program with an annual budget of about $80,000, Trout Unlimited does not set firm goals, but Terry noted that any additional water in the winter helps fish and their habitat. “The more the better, but we consider the program a success if we get any additional acre-feet of water for instream flows,” he said.

The situation is also made more complicated by the Rio Grande Compact. Under this agreement, formalized in 1938, water users in the valley must make sure that certain amounts of water are delivered across the state border en route to New Mexico and Texas every year.

And the winter flow program, which works cooperatively with the water users, is able to work within the constraints of the compact.

Although Terry said Trout Unlimited’s goal to raise streamflows in the basin is not specific, the Conejos district set a goal of adding at least three cubic feet per second (cfs) per day, a 43% increase from its minimum required release of 7 cfs, in the non-irrigation season, amounting to roughly 900 acre-feet total to the program.

Last winter the Conejos far exceeded its goal—releasing an additional 4,345 acre-feet during the winter months. Overall, the winter flow program generated more than 5,000 acre-feet, according to Terry. And although it was not the most productive year, it was a pleasant surprise.

“The message is that we made a small portion of the [Rio Grande] Compact water do more work while it was still in Colorado, by re-timing some of it so that Colorado’s streams benefitted and we still paid the bill,” Terry said.

Estevan Vigil is an aquatic biologist with Colorado Parks and Wildlife who has been researching fish populations and their habitat in the Conejos and Rio Grande rivers. He said the program has helped to restore and improve some trout and insect habitat, although low flows in the last two years especially have made it difficult to survey fish populations. Going forward, he said, climate change and drought will pose major slow-moving threats.

“Doing things like the winter flow program, where we’re keeping flows higher in rivers as often as we can, allows us to try to mitigate the impacts of those changes,” Vigil said.

Anecdotal evidence from fly-fishing outfitters suggests that the winter flows have helped bring more wild brown and other trout into local rivers and streams.

Randy Keys, owner of Riffle Water LLC in Antonito, said the program has helped restore certain areas for fishing, drawing more anglers to the area. “It has made a huge difference,” he said. “For example, before the program the area right below the Platoro [Reservoir] was nothing but meadow water, with not a lot of holding places for trout. Now it’s great for fishing.”

As water in this region, and more broadly in the West, becomes increasingly scarce, the winter flow program may become one of many examples of how different water interests with seemingly competing priorities are reassessing their historic perspectives in order to figure out how to squeeze more out of every drop, for everyone.

“It’s one of those things where we’re just changing people’s mindsets,” said Craig Cotten, Division 3 engineer at the Division of Water Resources, which has been working with Trout Unlimited to administer water under the winter flow program. “We don’t have to do everything exactly like we did in the past. We can adjust it a bit to get multiple benefits.”

Freelance journalist Susan Moran wrote this story for Fresh Water News and her work was supported by a grant from The Water Desk, an independent journalism initiative based at the University of Colorado Boulder’s Center for Environmental Journalism.

Fresh Water News is an independent, nonpartisan news initiative of Water Education Colorado. WEco is funded by multiple donors, a list of which can be viewed at wateredco.org.