Last Cast | Moose on the Loose 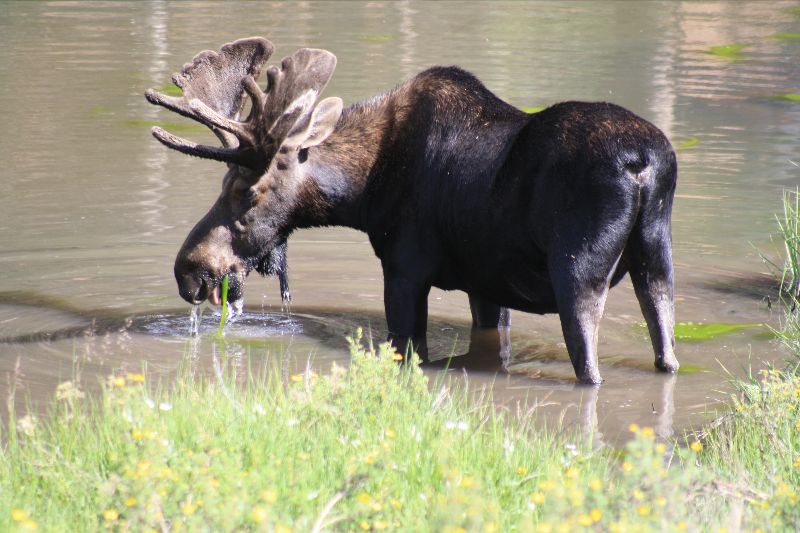 Moose on the Loose

Back in the late 90s and into the early 2000s, my family often visited a friend’s cabin on the Conejos, and almost every time we went up there, we’d stop at the now closed Fox Creek store and I’d ask what flies were working and buy a few bugs in exchange for the advice.  After several stops over a few years, I noticed a poster on display there for the first time.  I remember it was orange with a moose silhouetted in black with the caption BEWARE:  MOOSE IN AREA.  I asked the proprietor if he was kidding (“Really, moose this far south?”), and his response was something like, “Oh yeah, they’re spotting more and more, and they can be pretty ornery sometimes.”

I never saw a moose in the Conjeos country, but as I turned my attention more to the upper Rio Grande basin over the years, I’ve seen many moose in the Creede/Lake City area.  I still remember the very first time I saw moose when my youngest son shouted from the back seat on our way over the mountain:  MMMOOOOOSSSEE!!!  I did not believe him at first, and hesitant to go back and see, for fear of being late for the pre-fishing breakfast feast at a local diner with my fishing companions, I reluctantly turned around and sure enough, there was a very large bull with a cow out in a concealed field not far off the road.  Eventually, two young bulls also trotted out from the trees and made their way across the frosted meadow on that late September morning.  Since then, I’ve seen so many of them that it’s gotten to the point that if I fish a certain area or two and I DON’T see a moose, I’m sorely disappointed.  I have hundreds of photos, two of which are shown below.  The one of the large young bull on the creek bank was one I gave a wide berth to as I made my way upstream.  It was September, and the bulls can be amped up in their rut on testosterone, or whatever the ungulate equivalent is, and reportedly can get a little nasty.

Probably too often, I have sat across a stream watching a pair or a group of moose, having stumbled upon them, close enough to hear them “talking” to one another in soft low grunts and have been lulled into thinking I was just watching cattle lazily chewing on branches before I come to my senses and remember that these are wild unpredictable animals much too large for any of us to deal with if they decide to charge.  So I thought this might be a good place to repeat the warnings you often see about moose and what to do if you encounter one.

The first thing to think about is where you might encounter moose.  They can, of course, be found almost anywhere we fish.  I’ve seen them grazing in a dark spruce/fir forest, out in the middle of fields, and wading in lakes.  About 90% of the time, however, I see them in willow/alder thickets along small brooks and beaver ponds.  That means you need to pay particular attention to what’s around you in those areas.  I stupidly ignored my own advice in May 2018 when I was curious to see what the trickle of water left from the construction on the Continental Reservoir dam had done to North Clear Creek, and as I made my way along the bank looking for fish, I came way too close to a pair of cows bedded down in the thick brush there.  Quickly overcoming my shock at how close I had gotten to them, I started to back away slowly, talking in as low and calm a voice as I could muster to the one I saw initially when the other one burst from her hide-out and went crashing through the willows, fortunately away from me.  The first larger one then got up and moved slowly away from me as well, and because everyone kept their cool, everything turned out just fine.  I made it back to the truck, got my camera, and circled around above them and took a few shots from about 60 yards away (as opposed to the 4-5 yards from which I first saw them) as they started chewing on the tips of willows, all the while keeping a wary eye on me.

The worst thing to do is to take your dog for a walk in an area that might hold moose.  The only real predator of moose are wolves, and while there are none down here supposedly, a moose will see a canine, and it will trigger a defense response stored in the recesses of its genetic makeup, especially if you come upon a cow with a calf.  The other thing to avoid is a bull during the rut, typically September into October when a lot of us like to be on the water.  That is the quintessential definition of Lonesome On’ry & Mean, to borrow a lyric from Waylon Jennings.

Of course, if you avoided areas where moose might be, that would eliminate all remote places to fish and about half of all other water you might want to visit.  So, what do you do if you almost step on one like I did.  I’ve always found that wildlife will stay calm if you stay calm:  no sudden jerky movements, and certainly no shouting.  That might seem to be obvious advice, but I’ve seen many people, some of whom I thought were seasoned woodsmen, hop around slamming car doors, trying to hurriedly get that perfect photo to show off to everyone back at the office, only to spook their quarry and chase them away before they can attach the right lens.

If you do find yourself with 1000 lbs. of aggressive unpredictability coming at you, and unlike what is recommended for encounters with mountain lions and bears, you should run from a moose if you can as long as you don’t have to run too far because most of us won’t outrun one over a distance.  Running won’t trigger a predatory instinct because moose won’t eat you.  But if you can get to a copse of trees and use the trunks like the bars of a jail cell, preventing the moose from entering that protected space, do it.  The worst thing to do is to roll up and play dead.  Moose hurt you by trampling or stomping you with their sharp hooves, and rolling up like an armadillo won’t work, although I’ve seen some articles recommend going to the fetal position as a last resort if you get knocked down.

The most important thing, as is almost always the case, is prevention.  Leave the dog at home or in the car if you’re going into moose habitat.  Keep your distance and stay calm if you see one, and quickly devise an escape plan in case the moose decides to run you down.  I was fortunate those two cows ran away from me last Spring when I surprised them.  They usually don’t run away;  they’re huge, and thus not afraid of us, and their first response is not to flee like elk and mule deer.  In fact, that was one of only two times (out of dozens) I’ve had moose bolt away from me.  They almost always stand their ground, and I have to maneuver around them or wait for them to move on.  But I was not thinking about moose that day, and I should have been;  it was a perfect environs for moose.  Instead, I was lamenting how pitiful that little stream looked.  But I didn’t have the dog with me, and they didn’t have a calf with them.  It is often said better to be lucky than good sometimes. 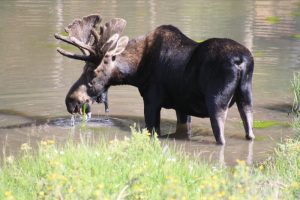 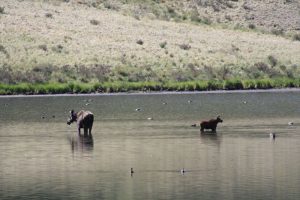