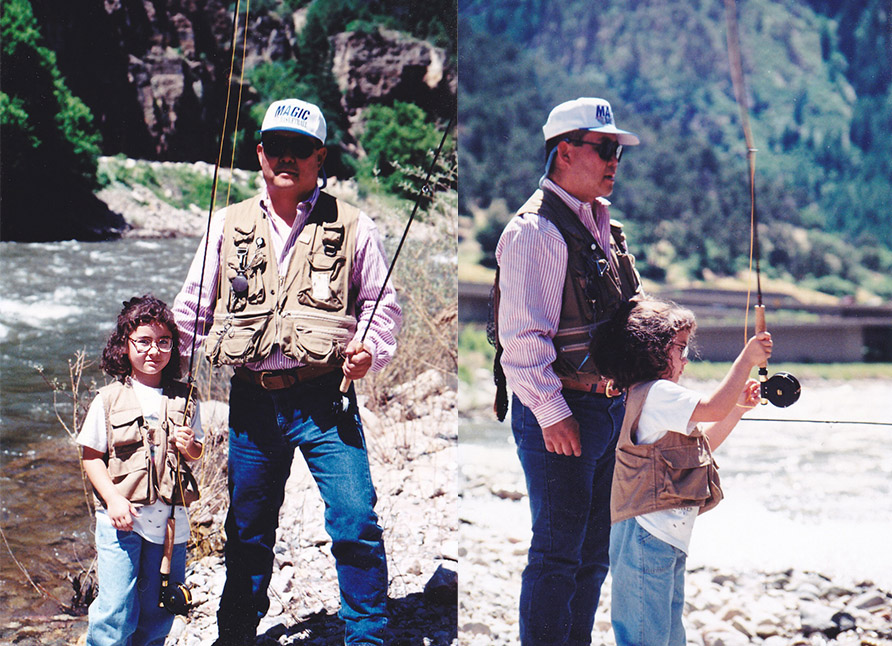 As a fellow wildlife officer and I watched a deer decoy on a mountain road, we laughed about each ticket we wrote. We thought about the embarrassed hunters who couldn’t resist the temptation to shoot at our artificial buck. On nights such as this, officers often fill the downtime with legendary tales and nostalgic stories of treasured times working with the Division of Wildlife.

Almost 10:30 pm and my cellphone rings. It is my ENT doctor, calling to inform me he had cleared his appointments for the next morning. He needed to see me right away because the lab results had come back from the Mayo Clinic. I asked him what my prognosis was, and he told me I had my vocabulary mixed up, and what I meant was a diagnosis. I already knew something wasn’t right, I wanted to understand if it was life-threatening or not. He told me I had a rare and deadly form of cancer in my sinuses. There it was, the “C” word. I asked him again what my prognosis was. I had 6 months to live if left untreated.

Living in Glenwood Springs was a fly fisher’s dream with legendary rivers within spitting distance. The Frying Pan, the Crystal, and Colorado Rivers were but a few miles from our house. The Roaring Fork was literally out our back door. The chemo and radiation schedule would put all fishing out of reach for months. Frustration set in with time, as I could see the Roaring Fork from our back deck. The rhythmic sound that only comes from a flowing river was a constant din in our house and had become a taunt. So close, yet so out of the question.

The outpouring of support from friends, coworkers, and immediate family (including my Tae Kwon Do family) was incredible. One coworker knew I liked Ben and Jerry’s Cherry Garcia ice cream and arranged for them to send a booklet of coupons for free ice cream! Cards and letters of encouragement soon filled a large plastic bin. Unfortunately, there is always an individual or two who do the unimaginable when they hear you are dying. Still, the overwhelming show of empathy and humanity from others always shines so brightly, the bad fades into irrelevancy.

The dreaded chemo wasn’t as trying as I had imagined. I certainly looked like hell. No hair, 50 pounds of water weight, a terrible cast to the color of my skin. My fingernails would shatter when I accidentally hit the kitchen counter with my hand, and my sleep patterns were totally irregular. Thankfully, the nausea was very minimal.

The radiation treatment was a different story. A fiberglass mold was made of my face. As I lay on the hard, cold stainless steel, the fiberglass mask was bolted to the table over my face. Unable to move my head, they assured me I would not feel a thing. While I felt nothing as the radiation was bombarding my sinuses, I could taste the iron as it boiled out of my hemoglobin. The sound was most unnerving and unexpected. As the radiation traveled through my head, I could hear the mucous tissue of my nose frying like bacon in a hot skillet. By the third treatment, I had none of these experiences, as my sinuses and mouth quickly desiccated to resemble beef jerky.

My oldest daughter Alisa was 5 years old at the time. As my radiation treatments progressed, I was rapidly losing energy and appetite. Even my beloved Cherry Garcia couldn’t be tolerated. I thought I should ask my daughter what she would like to do as soon as my strength returned. It was a risky question because my chances of survival (according to the research) was zero. Of the roughly 2000 documented cases of cancer I had contracted, there were no known survivors. The chemo and radiation were simply to grant me an extension of time beyond 6 months.

Because my daughter had already declared her love for Micky Mouse, I anticipated her request would be to visit Disney Land. Her unexpected answer was to go fly fishing at Grizzly Creek, a tributary of the Colorado River.

Alisa and I ultimately met our goal to fish Grizzly Creek. After months of recuperation, I finally had the strength to walk to the river. A tourist from Pennsylvania happened to be at Grizzly Creek that day. He was clearly satisfied to see how Alisa assembled her rod. She was skilled at checking for proper alignment by holding her rod at a 45-degree angle with the guides down, making sure there was equal daylight on either side of each guide. He couldn’t suppress a chuckle as he watched this little 5-year-old girl pinch the end of her line and thread line and leader through each guide and out the tiptop. The tourist snapped a couple of pictures and promised to send us copies. I really didn’t think much about it until his photos arrived in the mail. (ed. note – see below) Upon viewing his snapshots, it occurred to me his kind gesture had documented our day of speculation. Our day to disregard the statistics, to ignore the medical opinions, and to take a shot in the dark that this day would become a reality. That day was almost 25 years ago, and I have had countless fishing days between.

As fly fishers, we all have days of speculation on the rivers. Every cast is sent with the reflection that the correct nymph was selected, the weight is for the proper depth, the drift is without drag. We contemplate our dry fly presentation, hoping to fool the wariest of trout. And we believe as we watch for the tiniest twitch of the strike indicator, the flash of color as the dry fly disappears from the surface of the water. At the end of each fishing day, we collect our opinions, deliberate our decisions, review our hypotheses, and we surmise our resultant catch. And it becomes just another day of speculation.