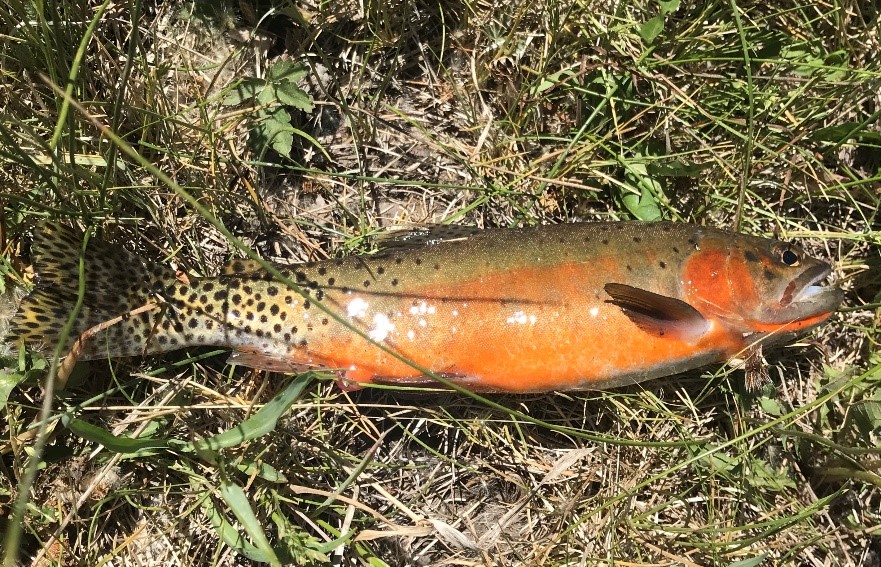 By Mark Konishi
As a kid growing up in the San Luis Valley, we would hear rumors of cutthroats with vivid colors being caught in secret waters. Cutthroats with orange slab-sides as brilliant as any goldfish. Many of the stories came from our classmate Jim, and it was always relayed down through his extended family. It was difficult to pin down exactly who in Jim’s large family actually caught the unusually-colored cutthroats. And, where these rare fish swam. The prospect of catching a cutthroat the color of a goldfish was too much for several of us to bear. Every spring, I would grab my Eagle Claw Trailmaster rod and my Pflueger automatic reel and our quest would begin. As hard as we searched, our hunt ended just like the Spanish explorations by Francisco de Coronado to find Cibola, the “Seven Cities of Gold”.  After several years, my friends and I determined this cutthroat of gold was just a fable of a fish.The skies of our troposphere are ruled by an evolutionary marvel, a bird that was but a sigh away from disappearing and translocating into a fable just like the cutthroat of gold. The peregrine falcon is the fastest animal on the planet, as well as the fastest visually processing animal known to man. Humans need still images to change at roughly 25 frames per second before they become fluid and are no longer seen as discrete pictures. Peregrine falcons require 129 frames per second before they stop seeing still images.

In the 1970’s, Colorado had 5 known pairs of peregrine falcons. The precipitous decline in the peregrine population was due to DDT and other organochlorine pesticides. Through extraordinary efforts by state, federal and conservation organizations this once-endangered species was removed from the endangered and threatened list in August 1999. This marked the most dramatic success story in the history of wildlife management.

Peregrine falcons are now commonly seen flying the skies of the San Luis Valley. Below them, in the lotic world of trout swims a species equally spectacular in evolution and beauty. In a few waters of the Rio Grande drainage, the once fabled fish of gold does indeed exist.

The Rio Grande cutthroat currently occupies roughly 11% of its historic range. Through years of settlement and development in the Rio Grande drainage, many decisions have impacted our native trout including the stocking of non-native species. Many actions were taken not to intentionally harm the Rio Grande cutthroat, but harm has often been the end result. In 2008 the U.S. Fish and Wildlife Service determined the Rio Grande cutthroat warranted protection, but reversed this position in 2014. In September of 2019, a federal judged ruled this reversal of decision was arbitrary and the fish must now be reconsidered for listing. Like the story of the peregrine falcon, the Rio Grande cutthroat now faces a potentially long and arduous journey. Over the years, man has created a broken story in the history of our native fish.

Like the peregrine falcon, we have choices and opportunities when it comes to the Rio Grande cutthroat. The San Luis Valley Chapter of Trout Unlimited is assisting with an extensive project to remove non-native trout from the Sand Creek drainage, and restock with Rio Grande cutthroats. For the first time in modern history, we now have the science to identify pure strains of Rio Grande cutthroats. Through decades of research, we now have the understanding of the biology of the fish to advance the propagation of the species. Because of the Great Sand Dunes National Park expansion, we also have the proper drainage to add to the range of the fish. Through cooperative efforts by state and federal agencies and Trout Unlimited, we have the financial means and the volunteer power to take on such a daunting project.

If we have the science, the biology, the correct drainage, the financial means and personnel to accomplish this project what consideration remains? What remains is a moral obligation to put the chapters back into the story of the Rio Grande cutthroat. It is our time for atonement.

Every Rio Grande cutthroat I hook takes my breath away. No matter how many I have caught through the years, this fish resurrects an emotional response from within. Possessing such beauty, I think this fish would even cause a non-believer to pause and wonder. And I think of the previous generations of the fish I am holding, and cogitate the connection to the Ancient Ones who once walked this land. Were they as stunned and astonished as I?

The first trout identified in the New World by Europeans was the Rio Grande cutthroat. The man who wrote of this special fish in 1541? None other than Francisco de Coronado, on his quest to find Cibola. Unknown to Coronado at the time, he had found his gold, swimming in the drainages of the Rio Grande.

As we embark on the Sand Creek project, please support our efforts to restore the Rio Grande cutthroat. If this project is successful, 15 miles of habitat will be returned to the proper species of fish. This will provide a major contribution to the expansion of occupied habitat, and will become an important consideration in the listing process. We are the cartographers in this recovery story. Join us as we map a path to success, so future generations can continue to catch this.