Carefully planned and scheduled to coincide with the all-time peak in Covid cases, Mark DeSanto Jan and I arrived in Havana on January 13, three days ahead of our fishing week.  We rented an entire three-bedroom apartment in a perfect location one block from the Malecon and within walking distance of virtually every Havana attraction (museums, old town, city square, the spectacular old Spanish fort, etc.).  The apartment set us back $99/day via Airbnb.  Cuba is in a bad way: bread lines, closed hotels and restaurants, and shortages of everything from food to medicine.  We helped the economy, and probably communism. however, by renting guides with classic old convertibles to give us city tours and take us out of town to see Hemingway’s house, the fishing village that inspired The Old Man and the Sea, etc.  We were also able to find a very good restaurant near our apartment and on our last night in Havana they had a Cuban jazz trio that was lights out.  Wonderful people and a fascinating city.  Don’t fish Cuba without spending some time in Havana.

Now for the fishing.  From Havana we took a six-hour bus ride to the mother ship, the ship then took us four hours more to our fishing area, Jardines de la Reina.  The Mother ship was delux.  Great decks with a hot tub, comfortable lounge chairs and a never closed open bar.  The food was some of the best we’ve experienced anywhere.  The first day of fishing our guide put us on an incoming tide run hunting for tarpon.  We stuck a couple but didn’t land any.  We did, however, land several varieties of snapper, including one in the 15-20lb range that helped feed the entire boat that evening.  We also took several yellow jacks around 20lbs. each.  Later we ran into a school of bone fish and took about six or eight of them and broke off several more with our overly aggressive tarpon hook sets.  A memorable day of fishing.  That night a cold front moved through with lots of rain, wind and cooler, but still pleasant, temperatures.  It was cloudy for the next few days and a bit windy so the fishing was a tad tougher but we stilll did pretty well.  The flats are immense with many nooks and crannies mostly out of the worst of the wind and our guide put us on more than a few bonefish, mostly singles and small pods.  We also fished deeper water and caught a variety of Jack’s and even a few barracuda.  When the weather improved we mostly focused on bonefish on the endless flats where days went by without seeing another boat.  A highlight of the last couple of days was finding a few large snook cruising the beach – fish that even poor blind Jim could see (see photo).  I land one much to the excitement of our guide who told us snook catches were more rare there than even permit.  It seems that snook prefer less salty water than that of Jardines where there is no fresh water entering the sea.  We never even saw a permit and there weren’t many tarpon around at this time of year.  Mark caught a nice one, however, around 20 lbs and we stuck a few but the only one we landed weighed in at about two pounds – but I may be exaggerating.  We probably landed 30-40 bonefish during the 5 and a half days of fishing.  Most were in the 2 &1/2 to 4 lb range but Jan got one close to seven lbs and I caught one north of 5 lbs on my last cast of the last day.  In summary, we thought the fishing was outstanding despite the relative lack of tarpon and permit.  During the week I landed my largest ever snook, jack, baracuda, snapper and bonefish.  Hard to complain.

A final word on the guides.  The fishing day went from 7:30 to 4:30 every day.  One of our days went from 4:30 (looking for early morning tarpon) to 4:30.  For the math challenged that’s 12 hours of fishing.  One day our guide brought us live lobsters that he cooked on an open fire on the beach.  He was also a great help when we hooked up with large fish by chasing them down with the motor or poling the boat in circles if necessary to keep the fish away from the boat and its motor.  For all of this the suggested tip was $300 for the week (we were more generous).  Quite a contrast with the guiding in the rest of the Carribian where the guides rarely put in more than six hours and expect a daily $100 tip.

It was a great trip to one of the last pristine fishing venues in the tropics and I highly recommend it despite the enormous amount of tests and paperwork required to get in, and out of, the country.  Cuba si! 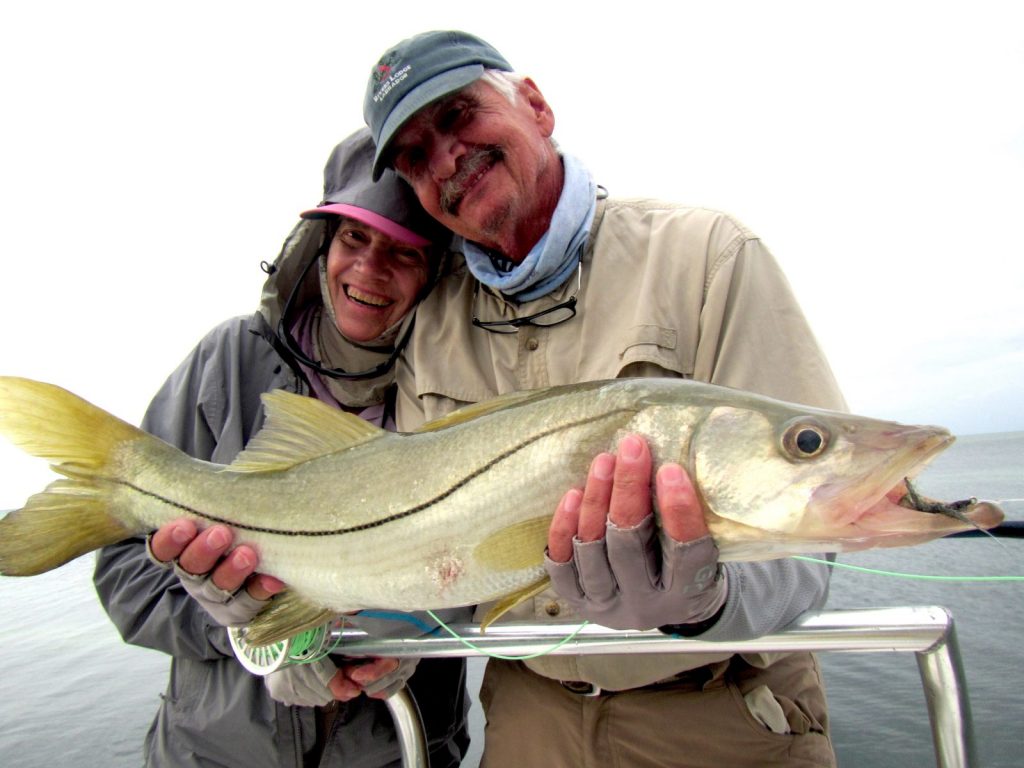