With regret, I want to let you all know that one of our members has recently passed away.  Dr. Rob Benson, emeritus professor of geology from Adams State, lost his valiant struggle against cancer on September 20, 2020.

Rob introduced me to the lower reaches of La Garita Creek, a brushy stream north of Del Norte, CO that in the recent past was filled with brown trout.  He knew just where to go and also what flies to use in order to have success (we were both believers that a great fishing trip involved at least some catching, not just fishing).  I guess that means that our trip to the Los Pinos Creek south of Osier Station in the San Juans was only a good trip, not a great trip.  We also liked to fish on the South Fork of the Rio Grande, just above the confluence of Beaver Creek with the South Fork.  Wading was generally pretty easy, especially for a tall man like Rob, and the fishing was generally pretty good also.  Most times, he caught the first fish and the most fish, but was generous in giving me first access to some good holes.  That’s just the kind of person Rob was.

Rob was a long-time member of the San Luis Valley (SLV) chapter of Trout Unlimited (TU), serving a stint as a board member (Projects Director) in 1999-2000.  He was always supportive of TU and its conservation mission.  One of his last contributions to SLV TU was a program on fishing in Yellowstone, which he gave in February of 2020.  The program was based on a summer trip he took in 2019 with his son Nick, and the photo below is one he used in the program.

Note that Rob is fishing for trout, not for bison! 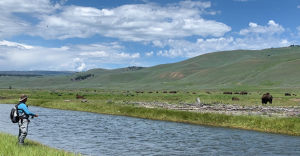 Rob Benson fishing in Yellowstone National Park in the summer of 2019.